I’ve recently, thanks to my father-in-law, have become a flashlight enthusiast and set out to find the brightest flashlight money can buy. Before I started my research, I figured a flashlight couldn’t cost more than a $100 and was shocked to find lights that run more than $2,000!

First, understand that Lumen is the measure of total light output falling on a surface of one square foot. Many people ask how to convert between candelas to lumen and it’s not possible to make a direct conversion, there are just too many factors. For example, here is a description of lumen: 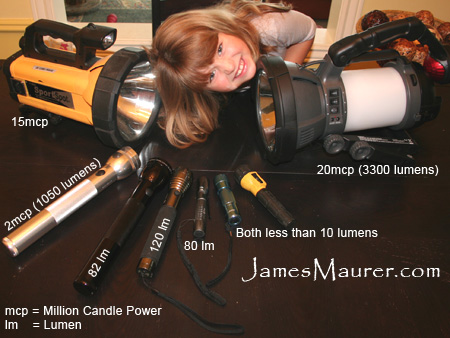 A lumen is the quantity of light energy per unit time arriving, leaving or going through a surface. The unit of luminous flux is the lumen (lm). A dinner candle shines at about 12 lumens. If a uniform point source of 1 candela is at the center of a sphere of 1-foot radius, which has an opening of 1 square foot area at its surface, the quantity of light that passes through is called a lumen. The sphere has a total surface area of 12.57 square feet. Since by definition, a lumen flows to each square foot of surface area, a uniform point of 1 candela produces 12.57 lumens. – See book by Lauren B. Sickles-Taves, ISBN 0803126069, 9780803126060, page 35.

Imagine a dark room and a small beam of sunlight coming through a little hole in the door; think of the beam as candlepower with not much lumen (ability to light up the room). A small lamp on the table would light up the room far more than the beam of sunlight. That lamp has high lumens, but modest candlepower. Look at the difference between the 1 and 20 million lights below and you’ll notice the higher candle power doesn’t mean the lumens will increase proportionally.

Here are a few comparisons:

A bit about Flashlight Blubs:

HIDs are bulbs that use a sustained electrical spark to create light. Very bright(and very efficient), can be focused really well as in can throw far) but requires a ballast which takes up space and is 10 Watts minimal. Smallest size I’ve seen them is around a normal 2D light size. You can choose from many different types, powers, color temperature and such. The lowest I’ve seen from a HID is around 500 lumen and highest goes over a million lumen. They usually have a longer life then an Incandescent bulb. Price is usually high though at over $100 for the cheaper ones. Usually powered by internal rechargeable batteries.

Incandescents, Halogen, Xenon, what ever that uses resistance from a thin wire to heat it self up to a glowing temperature to provide light I will group into incandescents. These are the most common, easiest to find lights. Efficiency is pretty low(compared to LEDs and HIDs) but it is found everywhere. There are also many powers to choose from(watts and lumen wise) but the max color temperature I’ve seen is in the high 3000ks(maybe 4000k). Sunlight is around 6000K. They give better color rendering then LEDs(things pop out more) but for the same output, have much shorter run time then LED or a HID for the same lumen. Many still use them for the color rendering or in hot wire mods (hot wire mods drive the lamps past their intended voltage and current for more output and a whiter light). They can give a good bit of throw(this depends more on the reflector then the emitting surface). The normal 2D incandescent light you see is around 15 lumen. Powered by all types of batteries, higher power ones use good rechargeable batteries.

LEDs give the best output to run time ratio for smaller lights. They can be dimmed without much change in tint unlike incandescent and HIDs (HIDs can be degraded faster by under or over driving). They have the longest life out of all the above two light sources. They come in a variety of different colors. They most common ones are the 5mm LEDs, you’ll need to use quite a few to equal one of the high power LEDs that most LED lights discussed here have and are hard to focus. They are very popular for smaller lights and many people here one at least one. The current gen of LEDs are the brightest ones out right now(they are the Cree XR-E P4-R2 bin, Seoul P4 U-V bin, Luxeon Rebel 80-100 bin, Luxeon TFFC 180 bin and up, Seoul P7 C bin). The better ones can easily hit over 200 lumen when driven within spec and can hit 300 if over driven. They are mainly powered by Li-ion batteries of various sizes, CR123s, and AA batteries. There are some that use other batteries. Many have multiple modes for longer run time, higher output, strobe and so on. Quote from candlepowerforums.com, an awesome resource for those looking to make their own high powered flashlight. 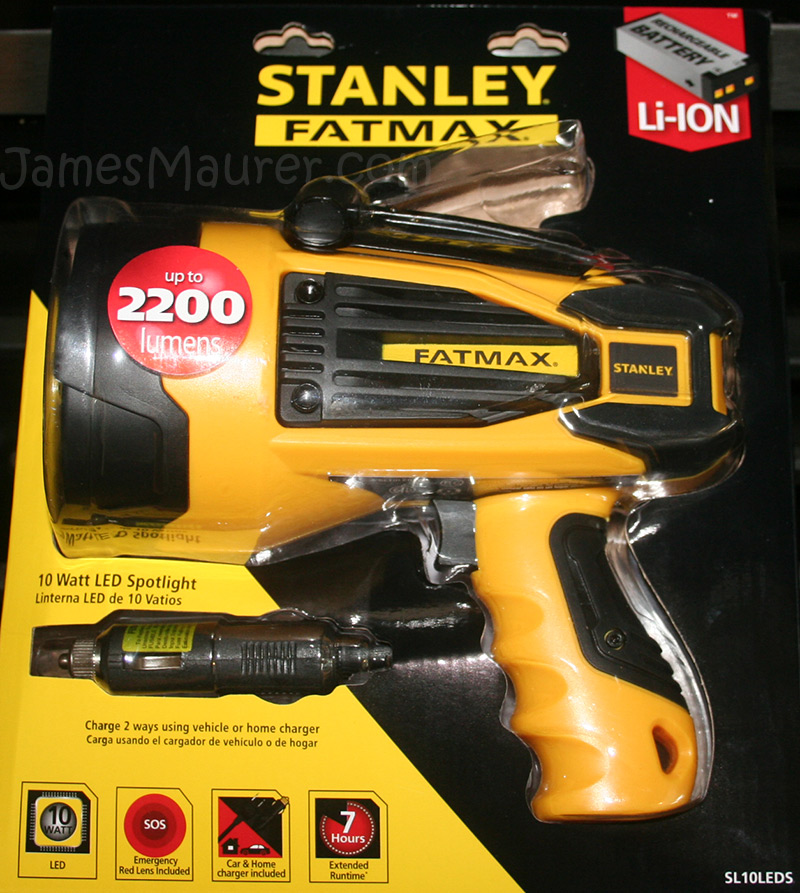 The flashlight above came with a 12 volt AC Adapter, has a high and low beam, and can run up to 7 hours! I’ll be using this on my pontoon boat for fishing and at home for spotting wildlife. It does not have any repairable parts and comes with a build in Li-ION battery. This spotlight is amazing and you can’t beat the price – and if you’re not happy, you have Walmart’s no hassle return policy!

Outdated, but leaving for your review 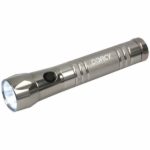 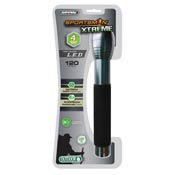 Warning: Although very bright, these lights can generate enough heat to start a fire, so caution should be used and such flashlights should be stored out of reach of children! The Borealis burned a hole into a sheet of white paper in less than 60 seconds and the Torch melts a plastic cup in about the same time.

I found a ton of flashlights in this range but only one outshines the rest. Most were flashlights like the Streamlight Stinger LED Flashlight for $100 which boasted 80 lumens, but when you can get the sportsman extreme for $25 with the same lumens and smaller, why bother?

Another was the X7 Light Cannon with lumens output of 1068 (Model number: 8437) which takes Four D-Cells and costs $400. Expensive, but I love the run time on this light! The LED Lenser light engineered by Zwebruder Optoelectronics GmbH of Solingen, Germany and available in the USA from Coast Products of Portland, Oregon. 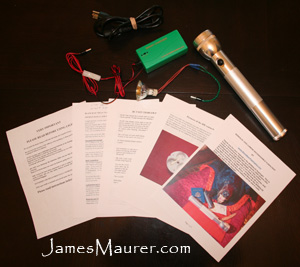 Borealis Flashlight is a 2 million candle power handheld. Brightest light with longest runtime for under $500

The one that stood out among the rest was the Borealis 1050 found at Black Bear Flashlights. This isn’t a small unit like the sports extreme 80 lumens, but it’s not big and clunky like a Spotlight. It’s the exact same size as a 3 D-cell Mag Light used by law enforcement (which by the way outputs only 82 lumens), but more powerful than those spotlights you see attached to police cars; in fact, this flashlight produces 1050 lumens – that’s 2 Million candle power!

The Borealis is so bright that it can burn a hole in paper in a little under 30 seconds; what I really like about the Borealis 1050 is the Spare ‘Safety Bulb’, a lower lumens bulb that not only makes this safe around children, but last even longer on every charge.

The Borealis not only holds the title of ‘Brightest light with longest runtime under $500’, but when used with the ‘Safety Bulb’, can also claim the ‘Brightest safe light on the market for under $500’. When you order, request that the ‘Safety Bulb’ be your spare. If you want the extra 1050 bulb as your spare, you can always buy the ‘Safety Bulb’; it’s only $10, is 500 lumens and still 6 times stronger than standard police issued flashlights!

I have purchased one of these and I must tell you, it is fantastic! Find yourself walking in dark areas and need protection? The Borealis not only blinds your attacker, but can render them unconscious when used as a blunt weapon :)

Looking to cook eggs with your flashlight? Then the Torch is just the light; this flashlight generates 4100 lumens which is brighter than the 20 million candle power spotlight! (top right of first photo). As you can see in the video, it’s something that you don’t want your kids fooling around with and can start a fire in seconds! It uses a 100 watt halogen bulb and heat resistant glass that produces 4100 Lumens. Downside, the Torch lasts only 15 minutes at peak charge. Price is about $300.

The torch is the brightest flashlight you can buy for under $500 and gets so hot, that it can fry an egg in a matter of seconds.

Brightest flashlight in the world, and more than $500.

The Polarion PH50 ‘Helios’ HID Searchlight is (or appears to be) the brightest flashlight around – at $2,395, it better be! It puts out 5,200 lumens, runs 60 minutes, is very small and only takes 4 hours to charge! I couldn’t bring myself to spend the two grand necessary for testing, so I’ll just have to trust it’s really that bright :)

To my knowledge, the Helios PH50 is the brightest flashlight in the world and used by military personnel in operations home and abroad.

A bit about Spotlights

Spotlights are big and bulky, especially to 20 and 40 million candle power versions. When you get into spotlights, you need to factor in a few items, those being battery life and the ability to shine (operate) while on 12v battery power (once the internal battery is drained). You can buy a 20 million candlepower spotlight but it will last only 25 minutes (about 10 to 15 minutes really bright, then starts dimming). If you run the battery down to nothing, you can cause damage, so really, you can only run it for about 15 minutes if you want to play it safe. It takes about 16 – 18 hours to recharge the battery!

The brightest spotlight I’ve found is the Sunforce 40 Million Candlepower HID Spotlight Lantern, Model# 77782 for $169. I could not find out what the battery life on this spotlight was and am guessing much less than the 20 million model.

A bit about Flash

I’m into fishing and one question I have always wondered, is if it’s better to light up a glow spoon with a camera flash or use a high powered spotlight. After a lot of research, a flash is by far the best way to light up that bait. A standard flash pulse puts out over 10,000 lumens which is far greater than any spotlight; a flash is definitely the way to go!

If you’re going to spend over $50 for a flashlight, you want to make sure you are getting a quality product. Black Bear Flashlights is a company run by a former watch maker Juan, who builds the Borealis 1050. In fact, you can build these flashlights yourself using a Mag Light shell and parts from different manufacturers, but I prefer to buy the finished product and save myself the hassle.

Before I purchased the Borealis, I had a number of questions for Juan and received immediate responses, something you don’t usually find with the big guys or Amazon type stores.

I received my flashlight, the charger, and detailed instructions. In fact, when I received the package, my daughter immediately grabbed the flashlight and tried to click it on. Fortunately, Jaun shipped it with the back not fully tightened for safety reasons. It’s details like this that set blackbearflashlights.com apart from the rest.

What’s next for me now that I have finished my quest for the Brightest Flashlight? It’s a 1kW Xenon Arc Tank Light and not really something you carry around with you, but something I must have. I’ll be donating a portion of its use to our local SETI project :)

Note: I’ve done my best in trying to provide accurate data; this information is based on my findings which may or may not be 100% accurate. if you have information you would like to share, please feel free to leave a comment.

6 comment(s) need to be approved.
89 replies