I feel a bit guilty this time of year as I watch my neighbors spend days installing their wooden docks. It is not something that one person would want to tackle and usually involves bribing family and friends to help with the installation. Of course, you can hire a company to come out and install it for you, but you’re looking at $500+ per install (depending on the length of the dock) and then another $500 to uninstall before winter.

Fortunately, my good neighbor Carl turned me onto an aluminum roll in dock. This dock has eight sections with each section being 16′ in length and 5′ wide. It took me only 22 minutes to install the dock! Below is a video showing just how easy it is to roll-in this dock!

Since my initial installation, the water level has risen to a point were I no longer need the end section, so I simply disconnected it and created an L configuration. Moving the sections around is a snap!

I should note that if you are on a lake with big waves, you can attach two j-screws to each section for added strength; something I had to do with my dock – I have a Tritoon with an upper deck that when combined with wind and waves, puts a lot of stress on the dock!

I know this roll in dock will outlive any traditional dock and when it comes to ease of installation, there is no match!

Update 2014:
It appears there is a screw inside the legs that is not stainless steal and rusted to the point it broke in half. Here is a picture of the the damage (click on the picture to see a close up): 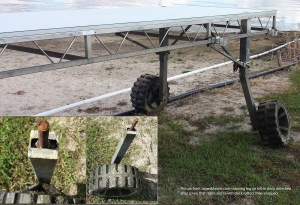 I’ve sent emails out looking for help and will post my findings here.

Update 4/2014:
I got in touch with the new owner, Mark Shultz, who was very knowledgeable and asked me to send in the dock leg for repair. When I originally purchased this roll-in dock at $1,700 a section, I did it because it was maintenance free and didn’t rust – I was never told about having to add grease and figured the screw shown in the picture below would be rust proof as well (there is no way to see the screw unless it breaks).

Mark explained that applying marine grease will prevent this from happening and that in the new version of the docks, there are access ports for doing just that. In my version of the aluminum dock, I have a small hole from which to work. 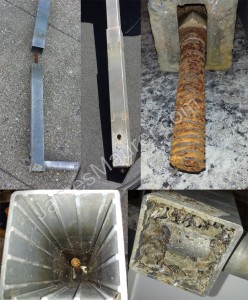 I should mention that Mark is putting a lot of work into handicap accessible boat docks and intends upon being the leader in this area. The service is fantastic and the system is fun to install – just make sure you grease it up every so often :)

Misc:
Recommended for cutting through the rust.

1 comment(s) need to be approved.
7 replies