Here is a scam claiming to be from The Coca Cola Company Official Prize Notification and they ask for all your personal information right up front! Amazing that some people fall for this!

We are pleased to inform you of the result of the just concluded annual final draws held on the (1st April, 2007) by Coca-Cola inconjunction with the British American Tobacco Worldwide Promotion. Your email was among the 20 Lucky winners who won Â£1,000,000.00 { ONE MILLION GREAT BRITAIN POUNDS } each in the THE COCA-COLA COMPANY 2007 PROMO.

However the results were released on 7th April, 2007 and your email was attached to ticket number (7PWYZ2006) and ballot number(BT:12052006/20) The online draws was conducted by a random selection of email addresses from an exclusive list of 29,031,643 E-mail addresses of individuals and corporate bodies picked by an advanced automated random computer search from the internet. However,no tickets were sold but all email addresses were assigned to different ticket numbers for representation and privacy.

The selection process was carried out through random selection in our computerized email selection machine (TOPAZ) .This Lottery is approved by the British Gaming Board and also licensed by the The International Association of Gaming Regulators (IAGR).

This lottery is the 3rd of its kind and we intend to sensitize the public. Raji M Remu.

To begin the claim processing of your prize you are to contact the fiduciary agentas stated below:

Please fill in the appropriate information in the space below by copying the CLAIMS PROCESSING FORM and pasting on a new compose page of your email box before filling then send:-WINNER’S CLAIM PROCESSING FORM

NOTE:
This information are needed for reference purpose,update of our files for record purpose and to avoid any misrepresentation of fact,which might lead to disqualification or double You are to keep all information away from the general public especially your ticket number and ballot number. (This is important as any case of double claims will not be entertained).

*Staff of Coca-Cola and the British American Tobacco Company are not to partake in this PROMOTION.

Accept our hearty congratulations once again!
Yours Faithfully,
Management.

Mushtaq Ahmed wanted everyone to know what he received so that you understand internet dreams like this never come true and scream of a scam! You can click on the tree attachments below to see the full image. 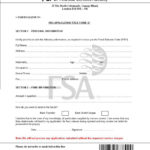 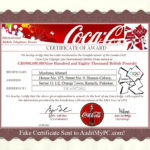 These are all images of Fake Documents made to look official in hopes that you’ll lower your guard and open your wallet! Don’t let greed get the best of you!