Up until now there has been no sign of Easter eggs in Windows 7, but recently discovered by Sea Jail Ye is a new hack that gives you full control of everything under one icon, it’s called Windows 7 God Mode!

For those of you that are not familiar with Easter eggs, they are intentionally hidden code that displays a joke, runs a program or grants rights. In many cases, a coder will insert special code into a software package and wait until the product is released to the public; once it’s too lake to remove the code, the coder then releases the hidden keystrokes required to active the program.

In the case of this Windows 7 Easter Egg, the programmer built in code that watches for a new folder created on the desktop and renamed to:

If you have Windows 7, try it now and you’ll see the icon instantly change to a Windows 7 GodMode icon.  Simply click on this icon and you’ll see everything appear before your eyes, a sample shown below! 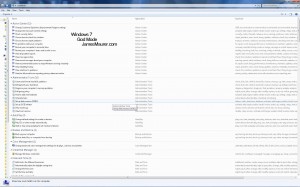 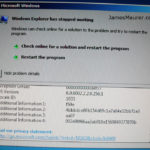 After a comment that this Windows 7 God Mode causes the 64 bit version to crash, I thought I would put that to the test on my 64 bit dell laptop and sure enough, it crashed! I wanted to take some screen shots, but the computer was locked up tight as a drum, so I took pictures with my camera and included them below.

My only option was to press down on the power switch and hold it for 5 seconds (hard reboot) and boot up again. When it finally came up, the screen went crazy – all text would disappear and reappear so fast it made my eyes water!

Did I mess up the computer for good? I decided to do a hard reboot again, and boot up in safe mode. The computer came up this time, started flickering for about 20 seconds and then stopped and there on my desktop was the folder I had renamed. I tried to right click it and rename, but as soon as I clicked, the screen started going crazy again and another reboot was required.

This time I went into Windows 7 safe mode but instead of right clicking on the God Mode icon, I just clicked it and dragged it to the trash bin, then emptied it. I did a soft reboot and all was right with the world again!

So, should you be so inclined to activate this Easter egg in Windows 7 64 bit and it crashes your system, simply reboot into safe mode, drag the icon to the trash bin and reboot.

The last comment and 1 other comment(s) need to be approved.
20 replies

Orange Tele Communication Prize WinnerLegally won the sum of $850,000.00 US Dollars from a Lottery Company in the...
Scroll to top