My Sprint 4G GalaxyS cell phone has been randomly rebooting or locking up as I navigate applications and got to the point where I had to take it in. I’ve been paying insurance from the start and was told that if anything happens, it will be replaced free of charge. 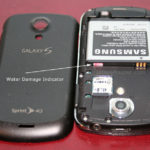 I brought it into the service center and was told it would take about an hour to fix, that the screen looked like it was causing the problem but that the battery had an active water damage indicator. Click on the photo to your right and you’ll see a close up – notice the red color (looks like a marker).

I came back an hour later and was told another hour; 2.5 hours later it was ready. When asked what the problem was, the technician said it was the screen, that there was no water damage whatsoever and that the battery indicator sometimes gives a false positive. I was also told that if this doesn’t work, then they would swap out the back end.

Got home and sure enough, same exact problem, only now it’s even worse. The following day I take it to a different service center (hoping it won’t take as long) where they immediately tell me it has water damage but they will look at it. An hour later, I’m told that because of the indicator, they can’t swap it out and they can’t work on it. The service manager stated that he would be personally charged $350+ if he were to do any work on it; story goes that he would swap out my phone, send it into sprint’s main service center and if water damage was discovered, they would bill him.

I can understand that, but why one service center operates different than the other and why they didn’t tell me this up front when seeing the indicator, I’ve no clue. One tech says no water damage and false alarm, the other is afraid to touch it. What really irritates me though, is that I have to pay $100. So I do have insurance, but there is a $100 deductible and I get a refurbished phone in the end.

I had the tech reset the phone before I left; I have had only one problem since then and that was after loading my apps back to the phone. I had asked both Sprint technicians about rooting my phone, which I was surprised to find out that they are okay with that; in fact, they were proud to state that Sprint is the only company they know of that doesn’t care if you root your phone. If you mess things up and loose your data, it’s on you; however, they will reset your phone back to standard software without charge it that happens.

Warning: you should verify this yourself before rooting your phone, I didn’t get that in writing :)

So, my next project is rooting my Sprint Galaxy which I’ll document and write about here.

Moral of the story – Before you take in your phone, check to see if the water indicator is active! If you search the internet for similar issues, you’ll see this is a BIG problem and customers are upset.

1 comment(s) need to be approved.
4 replies