I have always wanted to ride a Segway and when I found out they rent in Grand Rapids, I decided to give it a shot. A friend and I visited Segway Tours of Grand Rapids, a small office tucked away inside the Amway Grand parking garage.

When we initially arrived, we had to call a number on the office window and Mike Kaback answered. Mike explained that it would take about 10 minutes (15 at the max) to get to the office. Mike arrived with his son 10 minutes late making it 25 minutes, not 15. But hey, who’s tracking time, this is about having fun right?

Once we signed the waiver, we started training. There is a trainer mode which teaches you to balance. It’s a lot like standing on a log that is floating in the water, but the log only rotates 180 degrees rather than 360. The trick is to find your center of balance; if you lean forward, the Segway wants to move forward and the more you lean (forward or backward), the faster it goes in that direction.

After about 10 minutes, the training module was turned off and we were making our way through downtown Grand Rapids. It was lunch time and we found ourselves dodging pedestrians, crossing busy streets and trying not to hit trees! Stopping is not easy and I had a few close calls! 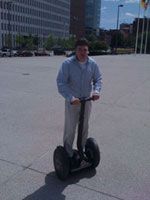 The Segway was fun and perfect for a large warehouse but downtown Grand Rapids was pushing it. These machines are quiet and people don’t see you until you are right upon them and although 12 miles per hour may not seem fast, it’s flying on a busy sidewalk!

Was it worth $50 for 30 minutes? It’s overpriced, no question, but for me, it’s something I’ve always wanted to try. What was really upsetting was the constant nagging for a tip from Mike’s Son Jack (Mike is the owner, his young son helps him).

Also uncouth was Jack’s constant reminder of the time! First off, we lost 10 minutes in training, then, we were reminded of time along the way and when we finally got back, we had time to spare (we were allowed to drive around in circles at the bottom of the ramp for the remaining time).

I can understand keeping a time table, but when we finished, as when we started, there were no customers waiting to rent the Segways and I fail to see the urgency – we probably had a total ride time of less than 20 minutes!

Being so tight with rental time but not being able to make their own schedule was irritating. The operation would do a lot better if they were more relaxed and let the customer enjoy the fun rather than worry about a few minutes and begging for tips.

The idea of having Segway rental in the Amway Grand’s parking lot is creative as you get use of the Amway name, but the traffic is an accident waiting to happen!

Would I rent a Segway again? Yes. Would I rent from Segway Tours in Grand Rapids? Not a chance!

The last comment and 1 other comment(s) need to be approved.
5 replies