It would seem like something out of a sci-fi movie, a spinning spiral with a green beam shooting out from the center towards earth and in the end, a black hole that momentary consumes everything around it, but it’s not a movie – it’s real and fully documented!

It happened yesterday morning in Norway and in front of thousands of viewers, many equipped with the latest in video recording phones. Posts are popping up on YouTube, news centers and blogs all over the world.

Some speculate that it was a malfunctioning rocket launched from a Russian submarine and went spiraling out of control. Strange thing is, nothing like this has ever been seen before, even considering the countless malfunctions in the past. 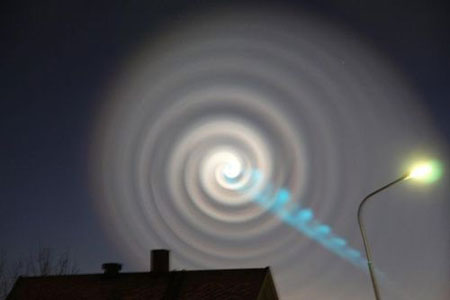 The Russian military first denied any testing but later admitted that they fired the ICBM “Bulava” as a test. No country in their right mind is going to test an ICBM missile while President Obama is in town, yet the Russian government, knowing the consequences, is admitting to doing just that (come on!).

NaySayer’s point to the revised statement, eager willingness to accept blame combined with unbelievable footage and lack of debris as further evidence of a cover up. They also point out that if the blue beam was from a missile, it would have the same spiral as the white spiral, not opposite as shown in the pictures.
https://www.youtube.com/watch?v=Sof_QK1z4b4

If not a missile, then what was it? One explanation is the Neutrineton, an experimental device that harnesses the power of Neutrinos of which an endless supply passes through us (and the Earth) on a daily basis (see Neutrino measurement for more information.)

Whatever happened, I doubt we’ll ever really know – but I’d have to agree that testing ICBM’s while the leader of another country is in town is not a plausible explanation!